Milan has an extensive public transportation system that consists of trains, metro, trams, and buses. The train connects the Malpensa airport to Milan. The ride takes about 40 minutes and costs 11 euro. The city of Milan and the suburbs are covered with a star-shaped metro system. The metro run regularly, and there is insignificant wait time between trains during the day. City travel is only 1 euro, but if you’re coming from suburbs then it’s 1.5 euro.

Covering the suburbs is a network of over 60 bus and metro lines, augmented with about 100 lines for urban area. Needless to say, such a large network can’t be printed meaningfully on a map. So while the metro map is posted all over the city and on all maps of Milan, the bus map is only accessible from the ATM website. Unfortunate for me, the ATM website was recently redesigned and the English version is “coming soon.” If you speak Italian, however, the site is quiet amazing with search functionality and public-transit routing directions. The map is interactive allowing you to view the bus/train arrival times for each stop. Keep in mind that Milan transport is imprecise, and it was common for the bus to arrive 5 minutes early. 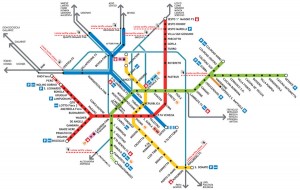 One inconvenience for visitors is that bus ticket must be bought it advance and validated on site. So if you’re at a hotel in the middle of nowhere with no stores selling bus tickets nearby, you’re out of luck. Or are you? You can still ride, as long you don’t get an inspector on your ride.

As for private transportation, namely taxi, two things to keep in mind: except for high volume tourist areas, you pretty much have to call for a cab; and they take cash only. And it doesn’t matter that you call for a cab with credit card capabilities, they still take cash only and have a thousand excuses why they couldn’t process your credit card. I speak from a sample of 3!