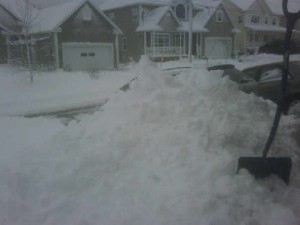 The second heavy snowfall of the week on Friday night, November 21, 2008, as well as the following Saturday resulted in 25 to 35cm of snow on the ground. Some areas were hit harder than others. Add to that the drifting snow effect that resulted from strong winds blowing countless tiny snow flakes from one side of the street to the other, and you end up with differences in snow hight in excess of 10cm between houses on one side of a street an another.

Guess on which side of the street was my house?

Yep, some areas of my drive way had an estimated 50cm of snow. The first photo shows the pile of snow in front of my windows after shoveling the snow only from the entrance of the house. The second photo, taken right after the first, show the view from door. This photo shows on the right side the pile up of snow that I had between the two cars. 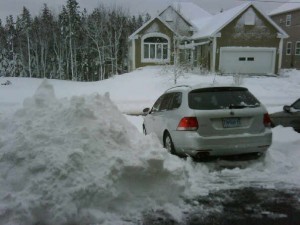 Luckily, clearing the drive way ended up a collaborative effort of 5 people over 2 days. My good neighbour John had a snow blower and cleared the front part of the drive way for us. My wife and I cleared the rest while our little boy was cheering us up. But that wasn’t the end of it. The street snow removal didn’t happen until about 3am that night and on Sunday morning we walk up to a wall of snow blocking our drive way. My good neighbour Peter from across the street decided to “borrow some snow,” as he phrased it, moving it from my drive way to his side of the street where there was more space to dump the snow.

Many thanks to John and Peter for all their help since we moved to Timberlea, and especially for this past weekend.